Arizona PBS and the Heard Museum are collaborating to bring Molly Mabray, the title character from the popular PBS Kids series “Molly of Denali,” to the museum for a free event on Sat., Aug. 27. Taking place from 10 a.m. – 4 p.m., the event represents Molly’s first official appearance in Arizona.

“At Arizona PBS, we recognize the importance of representation in media, and we’re proud to broadcast such a trailblazing kids program like “Molly of Denali,” that continues to break new ground for its representation of an Indigenous community,” said Arizona PBS general manager Adrienne R. Fairwell. “I’m thankful to the Heard Museum for their collaboration on what promises to be a great event for the many local families that have become fans of this fictional Alaskan vlogger.”

The first nationally distributed children’s show to feature a Native American lead character, “Molly of Denali” is created by a group of Indigenous actors, screenwriters, producers, production teams, advisers and even Alaska Native children, who are featured in the show’s live-action sequences. 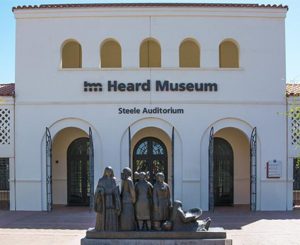 “As the Heard Museum expands our focus on creating dynamic experiences for youth and families, we’re delighted to partner with Arizona PBS to bring Molly to Arizona for the first time,” said the Heard Museum’s Dickey Family Director & CEO David Roche. “We’re thrilled to feature “Molly of Denali,” a groundbreaking program that showcases Indigenous culture and talent, amidst our galleries that celebrate American Indian art in all its forms.”

In addition to meeting Molly, event attendees will have an opportunity to hear stories, create art and explore the museum’s galleries. Because of support provided by Delta Dental Foundation of Arizona, attendees will also be able to pick up a free “Molly of Denali” book for children.

Julie Coleman is a contributing writer for Frontdoors Media and helps individuals, families and businesses maximize the impact of their philanthropy.
More in: Arts & Culture, Featured