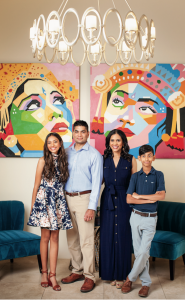 Philanthropy has become a powerful way for Swapna Reddy, JD, DrPH, and Subhakar Mutyala, MD, to pass along their beliefs and values to their children.

Swapna, a clinical associate professor of health sciences at Arizona State University, and Subhakar, a radiation oncologist at Arizona Center for Cancer Care, balance the responsibilities of big jobs and an active young family. “Prior to the pandemic, we were super busy all the time, going to this and that. Then everything came to a halt, and we filtered down to the most important things in our lives,” Swapna said.

They piled with their kids on the couch to watch family movies and spent time with their three dogs. Family activities also came to include service opportunities at United Way, The Salvation Army and St. Mary’s Food Bank. “As a family, we’ve done a lot around food insecurity,” said Swapna, whose work specializes in health policy and disparities.

In keeping with Subhakar’s work, the family also supports several cancer-focused organizations, including the American Cancer Society and Susan G. Komen Foundation. “We’ve tried to look at philanthropy from a couple of different lenses and try to bestow that on the kids, too. There is the financial-support aspect of philanthropy, and that is important, but we’ve tried to engage the kids in their communities,” Swapna said. “If there are populations or issues that we feel passionate about, we’re trying to extend it to say, ‘Let’s go into that community and try to get involved with service.’”

Both parents point to their 15-year-old daughter Jiya as an example. Jiya organized a pop-up vaccination event for an underserved community through St. Vincent de Paul. “That made me very proud,” Subhakar said. “It showed what kind of impact you can make personally, outside of just financial donations.”

Meanwhile, 12-year-old Kavin made his mark by discovering Scouting during the pandemic. “It’s been such an amazing experience for my son. He has grown so much,” Subhakar said.

In addition to spending time outdoors with other boys, Kavin, now a First Class Scout, has been doing a lot of community service — much of it with his father. “I think that is teaching really important values,” Subhakar said.

These are the unexpected treasures that have emerged over the past couple of years. “Philanthropy is and has become an increasingly big part of the fabric of our family,” Swapna said. “We have made it a family pursuit.”