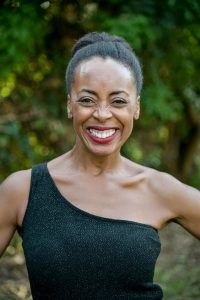 Writer, film and theater producer and educator Peppur Chambers has been appointed to the Chandler Cultural Foundation’s managing board.

Chambers is the first performing artist to serve on the board, which provides oversight for the Chandler Center for the Arts. She was appointed by City of Chandler Mayor Kevin Hartke, with the board’s unanimous recommendation.

Early in her career, Chambers studied advertising and marketing at Marquette University in Wisconsin and worked for a mutual fund firm in Chicago until she decided to pursue her artistic and creative passion. She moved to New York in 2000, where she took her first acting and writing lessons.

“For my day job, I worked for an entertainment firm with David Bowie and Shakira as two of our clients. Then in the evenings, I would go on auditions and perform,” Chambers said. “That experience really taught me what it takes to be a performing artist, both from the management side with budgets, operations and marketing, as well as what is required to thrive as a working artist.”

After several years in New York, Chambers moved to Los Angeles in 2004 and started to create her own work. Now an international writer/producer/educator, she strives to live her voice and inspires others to do the same, especially women.

She’s the creator of an award-winning web series (“The Brown Betties Guide: How to Look for Love in All the Wrong Places”), women’s empowerment workshops (Be Your Own Bettie), a dinner-theater show (“Harlem’s Night: A Cabaret Story”) and her published novella, “Harlem’s Awakening,” with the second installment “Harlem’s Last Dance” coming in 2023.

Known affectionately as “The Hot One,” Chambers is also a three-time valedictorian and record-holding athlete who has been inducted into the Kenosha Athletic Hall of Fame and danced for thousands as a former World Champion Chicago Bulls Luv-a-Bull dancer.

“Peppur possesses an unusual combination of not only being a successful artist, but one with an acute business acumen,” said board chair David Woodruff. “The Chandler Center for the Arts is always balancing those two forces — how to present new and interesting artists for the community while maintaining strong fiscal responsibility. Having a voice from the artist’s perspective, one that understands how to weigh those two objectives, will be a real asset to the foundation.”

For more behind this Frontdoor, visit chandlercenter.org/CCF

Frontdoors Media celebrates the people and groups who give generously and work to build the future of our community. It’s the premier source of information – and inspiration – for those who strive to make the Valley of the Sun a better place to live.
More in: News, Philanthropy Pros