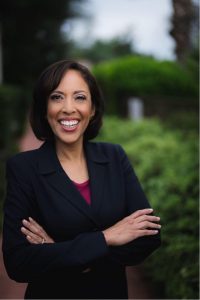 Anna Maria Chávez is an executive leader, attorney, inspirational speaker, writer and community advocate who has dedicated her career to advocating for others, especially underserved communities. In her most recent role, she served as the inaugural Chief Impact Officer for Encantos, an EdTech and Public Benefit Corporation, where she was responsible for creating the Encantos Social Impact Foundation and led the organization’s philanthropic, education, publishing and digital business.

“I am deeply honored to serve as the next president and CEO of the Arizona Community Foundation,” said Chávez. “ACF is in a strong position, the ACF staff is exceptional, and the donors and partners are aligned with a great vision. I look forward to working with them and the many Arizonans who generously support the state’s greatest needs.”

Growing up in Eloy, Arizona, Chávez developed the leadership skills that would propel her into a career in public service. She held numerous posts in President Bill Clinton’s administration, and later returned to Arizona to serve then-governors Jane Hull and Janet Napolitano.

Her success led to her appointment as the CEO of Girl Scouts of the USA, where she served from 2011-2016. In 2016, Chávez was named one of the World’s 50 Greatest Leaders by Fortune Magazine, cited for her vision and creativity in working to revitalize the Girl Scout brand for a new century. In 2017, Chávez joined the National Council on Aging, where she was ultimately appointed to serve as NCOA’s Interim President and CEO. Chávez then became the Executive Director & CEO of the National School Boards Association and served as an ex-officio director on its Board of Directors.

In 2021, Chávez was appointed as the inaugural Chief Impact Officer of Encantos, PBC and President of Encantos.org. Under her leadership, Encantos was named one of the top 100 startups by Business Insider and was selected to be a part of Apple’s prestigious Entrepreneur Camp.

“Anna Maria brings her expertise and experience paired with a passion for ACF’s work, making her a uniquely qualified leader to guide ACF in improving the quality of life for Arizonans,” said Leezie Kim, chair of the CEO Search Committee. “With a childhood rooted in Eloy and a professional career in public service to two Arizona governors, Anna Maria’s love and service to our community come naturally. After leading ACF for the last 13 years, I am proud to welcome Anna Maria as the next President and CEO for the Arizona Community Foundation,” said Steve Seleznow, outgoing ACF President & CEO.

“While it is difficult for me to leave such a great organization, I am confident in the selection of Anna Maria and the senior leadership team in place will continue to meet the needs of the donors and community across the great state of Arizona.”

For more behind this Frontdoor, visit azfoundation.org

Frontdoors Media celebrates the people and groups who give generously and work to build the future of our community. It’s the premier source of information – and inspiration – for those who strive to make the Valley of the Sun a better place to live.
More in: News, Philanthropy Pros