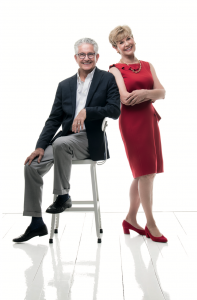 “The best thing about doing well is being able to give. After a while, ‘things’ don’t count as much as interacting with others and joining forces to make a difference.”

Making a difference had humble beginnings for Michael and Robyn DeBell.

“We got started with bake sales and soccer while raising our daughters in Tucson,” Robyn said.

That launched a philanthropic journey addressing everything from medical research, education and the arts, to safe housing and food insecurity. Every cause is worthy, but a few stand out. For Michael, it’s their support of TGen and the Arizona Science Center as well as his work with Christmas in April, now known as Rebuilding Together Valley of the Sun. For Robyn, it’s co-founding the Phoenix Women’s Board of Steele Children’s Research Center, known as PANDA (People Acting Now Discover Answers), to help fund research.

“We moved to Phoenix in 1989, when I was working for DMB Associates,” Michael said. “The following year, I encouraged DMB to get involved with a group being formed—Christmas in April. I pulled together employees and subcontractors.”

One weekend every year, Christmas in April renovated and repaired approximately 25 houses for low-income homeowners, including veterans, elderly and disabled individuals. Michael, who spearheaded DMB’s involvement for 16 years, says it was “gratifying to give people a safe home and renewed hope, and it was the most connected I’ve ever felt.”

For Robyn, getting involved was personal.

“I watched my neighbor lose her son to leukemia,” she said. “My friend, Penny Gunning, shared my passion and we kept asking, ‘What can we do?’”

PANDA was established in 1999, launching the “Children Helping Children” fashion show that brings together child models, parents and grandparents. Proceeds support research and expand the reach of the University of Arizona Steele Children’s Research Center.

“We wanted to create something that would have an impact for years,” Robyn said.

Having raised more than $20 million to date, PANDA is now run by a vivacious board that includes former models and junior members—a testament to its continued relevance.

Credited with decades of service, board appointments, scholarship endowment and charitable giving, the DeBells model what it means to make a difference.