Cover Story: The Play’s the Thing

Act One: What’s Past is Prologue

Southwest Shakespeare Company has always emphasized education and making Shakespeare understandable to the masses. But since its founding in 1994, the company has transformed from a small company of local artists to one of the Southwest’s theatrical powerhouses. It also moved beyond its home in Mesa to venues in Phoenix, Scottsdale, Tempe, Peoria and more. 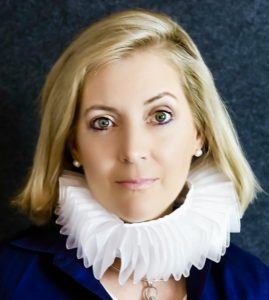 Along the way, there has been off-stage drama, too, including mounting debt, dwindling audiences and a devastating fire in 2017 that ravaged the company’s production warehouse and destroyed millions of dollars worth of costumes, sets, tools and props.

Enter Mary Way. Hailing from a long line of actors, Way has significantly impacted several of the Valley’s arts institutions, and she received a Governor’s Arts Award in 2017. But she feels a special fondness for Shakespeare.

“All three of my children found a home in the arts. That was the place they could go and make friends, develop camaraderie and a creative outlet,” she said. “I knew what Shakespeare had done for my kids during their toughest years. I felt this was something I could help with.”

“I call it the breadcrumb trail of life,” she said. “You just land in a place where you have skills and an organization seeks them. 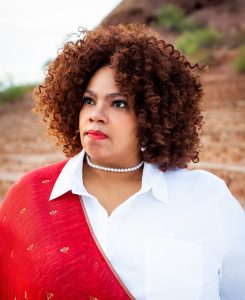 In recent years, Way has helped Southwest Shakespeare bring the larger world of Shakespearean and other classical theater to Arizona by presenting literary-themed productions from across the country and around the world. One of them was from the Harlem Shakespeare Festival.

Debra Ann Byrd founded Harlem Shakespeare with the express notion of changing the world. A native of Spanish Harlem, Byrd first fell in love with Shakespeare after seeing Black actors in a Joseph Papp production in New York City. Although she had a drama degree and serious training, agents told Byrd not to expect a career in the classics.

“I thought that that was not fair. I decided to go back to my community and create a program called Take Wing and Soar Productions. It would be a theatrical safe space where artists of color will hone their skills and build that confidence while building their résumés,” Byrd said. “I was setting out to change the face of American classical theater.”

Byrd came to Southwest Shakespeare in 2018 with her all-female “Othello.” (She had won Broadway World’s “Best Actress” for that performance.) She returned the following year to do her celebrated one-woman show, “Becoming Othello.”

Then COVID hit, and Byrd ended up staying in Arizona for an entire year. “That’s when the love affair with Arizona started,” she said.

Byrd and Way discovered affinities that made them a perfect pair. “She’s my sister from another mister,” Byrd said. “We play off of each other and hold each other up with our individual strengths. And, you know, make some good art in the world.” 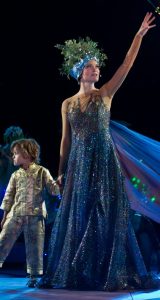 Eventually, Way asked Byrd to become Southwest Shakespeare’s artistic director. Byrd moved to Arizona, got an apartment in Mesa and has been getting her footing in the community since. “I’m working to help the company further its mission and seeing if my brand of Shakespeare plays well here in Arizona, or whether they’re going to kick me out!” she said.

Shakespeare’s works are required reading for high school students. They have been performed in almost every language, on stage and screen and at festivals around the world. So how do you attract new audiences to see plays that are more than 400 years old?

“We start with a brilliant director, so that they can, in turn, coach the actors,” Byrd said. “And we try to twist it up a little bit. Add a person of color in the lead — a lot of people haven’t seen that. They don’t know what it’s like for an Egyptian tawny-colored Cleopatra to hit the stage.”

At Southwest Shakespeare, women sometimes play title roles that were meant to be played by men. It’s part of a reckoning in the theater community with entrenched biases. “I don’t like to choose artists just because they’re people of color, but if they are people of color, and they do have the skill sets, then I’d like to give them an opportunity,” Byrd said.

At Southwest Shakespeare, representation matters. “People of color, women, LGBTQ, people of different physical abilities — when we talk inclusion and diversity, we mean all of that. So that no one feels kept out, shut out or left out,” Byrd said.

Mary Way agrees, especially when it comes to the company’s education outreach. She ticks off Arizona’s latest Census numbers, noting that she wants Southwest Shakespeare productions to reflect the full breadth of the state and their audiences. “Kids that come to our shows love it when they see themselves represented on the stage. It can encourage and change lives,” she said.

Act Four: The Short and Long of It

Shakespeare had a sixth-grade education, and both his parents were likely illiterate. Yet he is considered one of the greatest literary geniuses of all time. Mary Way sees him as a perfect role model for children. “How many children in Arizona have parents that don’t read and write in English?” she said.

As a key part of its mission, Southwest Shakespeare performs in schools across the state, bringing the magic of an expertly executed theatrical illusion to students. “The best kind of education comes when you’re being inspired and entertained,” Way said. “When the brain is open and receptive, the student teaches themselves. They take what they want or need to learn from what they’re watching.”

In his 38 plays and 154 sonnets, Shakespeare used about 17,000 words — and invented about 10 percent of them. This cavalcade of creativity appeals to kids on a visceral level. “There’s something about that Early Modern English, where they actually have to engage and seek understanding. Once you crack the code, it’s remarkable what happens,” Way said, citing studies that show that studying Shakespeare has a powerful effect on students’ critical thinking skills, engagement in school and empathy. 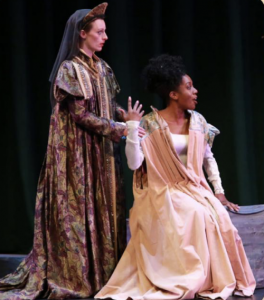 Education outreach is a passion at Southwest Shakespeare, and expansion is a goal. The company wants every child in Arizona to have access to the Bard, no matter where they live. “Shakespeare builds minds and characters and shows people the best and worst of the human experience,” Way said. “We can see domestic violence, broken homes and suicides, along with joy, forgiveness and true love. We can see everything in Shakespeare that exists in kids’ lives today that might help them come to terms with their story.”

Reaching every single student in Arizona is the mission and the calling. “We fall short of that just because of funds,” Way said. Producing live theater is expensive. To get to the outer reaches of the state, Southwest Shakespeare has to hire a truck, and actors need to spend the night.

“The schools do not necessarily have the budget to bring us in, but when we do come, they will remember it for the rest of their lives,” Way said.

As a nonprofit with limited overhead, Southwest Shakespeare’s operating budget is lean. “We aim to break even, but people need to be paid. We want to put the best work out to the Phoenix public, and the students should be seeing the best actors. It is an art form and takes a lifetime of learning. Classical artists go through so much training,” Way said.

Respect for actors, audiences and the work — this is where Way and Byrd’s missions align. “At the end of the day, we are telling stories, and we’re producing theater and training up theater artists, giving them opportunities to showcase their work, and showing our productions to a lot of schoolchildren,” Byrd said.

But what if Southwest Shakespeare doesn’t get the financial support to make all of that possible? “Woe be unto the city that loses their Shakespeare company due to apathy,” Way said. “I don’t think it bodes well for the educational system or the state of mind of the residents.”

Stakes are high as Southwest Shakespeare prepares for the new season. Byrd is bringing in two of her mentors and casting the best talent she can find. “We have some of the best directors in the country coming in. We have a Tony Award-winning Best Actress,” Byrd said. “We’re looking to give audiences of all ages a very exciting Shakespearean experience, where you come and we disturb the air.”

To learn more, go to swshakespeare.org.

Karen Werner is the editor of Frontdoors Media. She is a writer, editor and media consultant. She has interned at The New Yorker, worked at Parents Magazine, edited five books and founded several local magazines. Her work has appeared in Sunset, Mental Floss and the Saturday Evening Post.
More in: Cover Story, Magazine