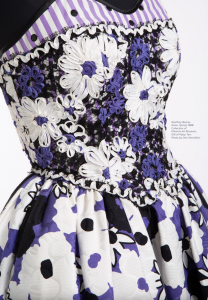 You might know Geoffrey Beene’s name from his men’s shirts or Grey Flannel cologne. What you may not know is that Mr. Beene — as he was known in his lifetime — was also an exquisite craftsman, the maker of visionary haute couture for women, who combined luxury with superb design and comfort.

“That is a blend that we do not find with many designers,” said Helen Jean, the Jacquie Dorrance curator of fashion design at Phoenix Art Museum. “Mr. Beene’s contemporaries were also making beautiful, luxurious garments using incredible fabrics. But Mr. Beene was committed to comfort.”

Today, thanks to the friendship between a New York publisher and a local philanthropist, Phoenix Art Museum possesses one of the premier collections of Geoffrey Beene’s work and is preparing to tell an important part of his story to the world.

Born in 1924, Geoffrey Beene was one of the most awarded designers of all time — a designer’s designer who dressed movie stars like Faye Dunaway and Glenn Close and first ladies like Lady Bird Johnson, Pat Nixon and Nancy Reagan. Deemed an “American Original” by the Smithsonian, Beene received eight Coty Awards, the most awarded to any one designer. Yet despite his success, the soft-spoken Beene nimbly, repeatedly pivoted to experiment with movement and form.

Phoenix Art Museum’s new exhibition, MOVE: The Modern Cut of Geoffrey Beene, examines the bold, imaginative fashions of the late designer, specifically his work in the mid-1990s. “During that time, he was doing these beautiful runway ballets, where he was working with choreographers and dancers to create fully realized balletic presentations that were his runway shows,” Jean said. 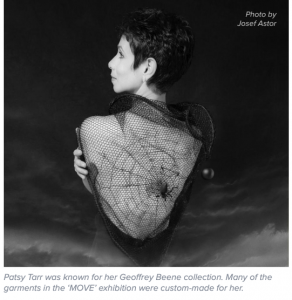 The exhibition came about thanks to the gift of Patsy Tarr, a prominent supporter of dance in New York and the founder and publisher of the award-winning 2wice magazine. Today, Tarr is a respected doyenne of the arts, but back in 1979, she was a young working woman who needed a wardrobe that would transport her from the responsibilities of motherhood by day to the sophisticated world of dance by night.

She remembers the first Geoffrey Beene creation she ever wore. “I honestly just loved how it looked on me,” she said. “I had had a baby, and it was roomy across the bosom and had a full skirt and jacket so it sort of covered me up and showed off my few assets. I just looked a whole lot better in that dress than I normally looked!”

That ballgown led to a collaboration that lasted 20-odd years. “It became easier to depend on Geoffrey Beene because it never failed. No matter what you selected, it was going to be great,” Tarr said.

Apart from the impeccable clothing, Beene and Tarr came together around their shared love of dance, which they discussed often. “He was from a completely different, earlier generation of people working seriously in the arts,” Tarr said. “One of his design ideas was jumpsuits.”

Made in solid patterns in a solid color, the garments created dancerly illusions. “If you squinted, you sort of looked like a line moving in space,” Tarr said. “I thought that was about as close as a civilian could get to looking as though they were dancing. That’s what really hooked me.”

And with that, Tarr became a walking advertisement for the modernity and versatility of Beene’s fashions. A busy mom with two young children, she literally jumped into his jumpsuits for philanthropy events at night. 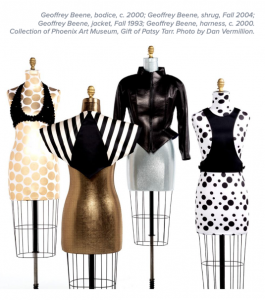 Beene’s original plan had nothing to do with fashion. He was raised in rural Louisiana in a family of doctors who expected him to follow the same path. After studying medicine for three years at Tulane University, Beene transferred to the University of Southern California and worked in the display department of I. Magnin until 1947.

Beene’s early anatomy training was always apparent in his work, particularly in how he placed seam lines. His seams rarely cut straight down the body. Instead, they curved, spiraled and wrapped, tracing the body’s natural musculature and suggesting movement and speed.

“It’s creating movement in the most practical way in that it’s wrapping around the body. It’s allowing the body to move because it’s hugging the body tightly,” Jean said. “It’s creating a shape that becomes a second skin, but it’s also creating visual movement.”

Inspired by the sinuous lines of the human body, Beene sought ways to engineer beautiful modern garments that allowed the wearer to move freely through life. “Beene was committed to creating clothing that supported the woman and helped his wearer shine,” Jean said. 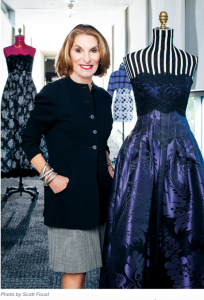 Count local philanthropist Ellen Katz among Beene’s many fans. What does she admire about his designs? The list is long. “The overlays of fabrics, the cut of the silhouette, the quality, the uniqueness, the styling,” she said. “He was ahead of his time and very architectural in many ways, yet there’s this wonderful, fanciful element as well. His clothes were just stunningly beautiful.”

A longtime friend of Patsy Tarr, Katz recalls the two wearing Beene’s clothing in New York in the 90s. “I would have a few pieces here and there, a ballgown or something, but that’s all Patsy wore. She usually wore black jumpsuits and put stunning boleros or tunics on top. She had an amazing collection,” Katz said.

Then, years later and out of the blue, Tarr called her friend Katz and told her something shocking: She wanted to get rid of her Beene clothes.

Katz and her husband Howard started visiting Arizona 24 years ago to play golf. (Today, they split their time between Carefree and New York.) They joined Phoenix Art Museum’s Circles of Support program to get involved in the community. It was a perfect fit for Katz, who majored in art at Northwestern University.

Katz is no stranger to philanthropy — she serves on several boards in New York and was on the Junior Council of MoMA. But Phoenix in the early aughts felt unique. “I had a feeling that maybe I could make a little bit of a difference,” she said. 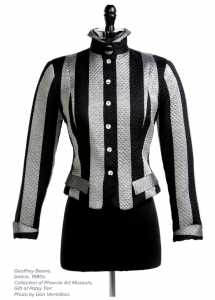 By 2006, the Katzes had endowed funds to support the construction of a 25,000-square-foot wing for contemporary art, known today as the Ellen and Howard C. Katz Wing for Modern Art. Katz served as chairman of the museum for three years and created two of the museum’s most successful fundraisers: the pARTy — the institution’s annual fall gala — and the Independent Woman Luncheon hosted each spring. Together, these events have raised millions for Phoenix Art Museum. In honor of her support, Katz was named an honorary trustee of the museum’s governing board.

Still, it was a surprise when Katz’s phone rang a few years ago. “Patsy called me one day and said, ‘Ellen, get over here. I have so much Geoffrey Beene. I’ve got to get rid of it. Let’s pack it up and send it to the Phoenix Art Museum.’”

Fast-forward several years, when a roof leak in her East Hampton home prompted Tarr to decide it was time to donate her collection. “I knew Ellen, and I had met Dennita,” Tarr said. “So, when the time came to give the rest of the collection away, the Phoenix Art Museum had been so good to me. And they were willing to take it all.”

Tarr’s gift of more than 350 Beene designs immediately established Phoenix Art Museum as holding one of the nation’s foremost collections of the designer’s work. It also provided a unique opportunity to examine how an individual curates their wardrobe, akin to how an art collector curates a collection. 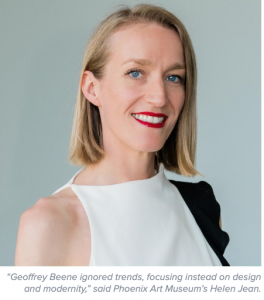 “A gift like this allows us to tell a very important part of American fashion history,” said Jean. “Patsy has been willing to share stories and insight and connect us with other people that knew Mr. Beene. So her gift has gone far beyond sharing these objects with us. It has really allowed us to tell a much deeper and richer story.”

A hope is that this story will be heard across the country. “We hope to get some write-ups in New York magazines and newspapers. It will draw attention not just to the archive of Geoffrey Beene, but to Phoenix and to Phoenix Art Museum,” Katz said.

That, in turn, may materialize into more such donations and another chance for Katz to make the kind of difference she set out to make. “We’re excited that news of our exhibition may inspire and encourage other private collectors to reach out to us and other museums to share some of their collections,” Jean said.

Spanning three galleries, MOVE, which runs Feb. 1, 2023 to July 23, 2023, is the culmination of years of work researching objects, putting together ensembles, and interviewing people in Tarr’s and Beene’s circles. “We reached out to models and dancers and choreographers that worked with Mr. Beene so we could add more voices and share insight into wearing and moving in these objects,” Jean said.

With his owlish black glasses and avuncular style, Beene appeared more Southern gentleman than fashion pioneer. Yet MOVE lays out his thoroughly modern vision in which every detail is considered. 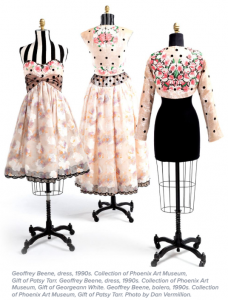 “The thread color is carefully chosen. Sometimes they are metallic; sometimes they are a bright color that contrasts the fabric,” Jean said. “Pay attention to all of the fabrications. It may be a polka-dot dress, but it might have four different sizes of polka dot throughout the dress, the lining, the trim and underlinings.”

It’s a look back to a time that was not long ago, yet feels worlds away. “At this point, honestly, it feels like they’re historic, because clothes are made so differently now,” Tarr said. “Geoffrey Beene was one of the last great hurrahs of the 20th century.”

Patsy Tarr swears she never set out to become a fashion collector. “I was just the regular lady in the street who needed a dress,” she said. And though today she is a grandmother more likely to wear jeans and a T-shirt, she remains grateful for the glorious years when Beene’s life overlapped hers.

“It was nothing intentional. There was no agenda. It just happened,” she said. “When I look back on it, I think this was one of the greatest strokes of fortune that ever happened to me. Because literally, for decades, I wore gorgeous clothes with very little effort. It was simply a phone call away.”

To learn more, go to phxart.org.

Karen Werner is the editor of Frontdoors Media. She is a writer, editor and media consultant. She has interned at The New Yorker, worked at Parents Magazine, edited five books and founded several local magazines. Her work has appeared in Sunset, Mental Floss and the Saturday Evening Post.
More in: Cover Story, Featured, Magazine