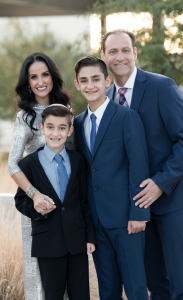 For Jeff and Lisa Geyser, humanity is at the heart of philanthropy. Parents to sons Alex, 14, and Jackson, 12, they seek meaningful opportunities to teach their children the value of giving back.

“Even something that seems as insignificant as passing out a cold drink on a hot day makes a difference; it restores a person’s dignity and lets them know they matter,” said Jeff.

Distributing cold beverages on scorching summer days is a family activity for the Geysers. It’s also an extension of the couple’s long-standing involvement with organizations that serve homeless people, including Central Arizona Shelter Services (CASS), the state’s largest and longest-running emergency homeless shelter.

Jeff began volunteering at CASS during college. He and Lisa are credited with elevating the shelter’s philanthropic presence. They hosted the first-ever Dinner for Dignity event in 2017, raising nearly $165,000 and earning distinction, at that time, as the organization’s most successful fundraising endeavor.

“We’re proud to have been part of that inaugural event, increasing the financial impact and introducing CASS to a new profile of individuals,” Lisa said.

Jeff and Lisa are involved with many notable fundraisers, primarily those serving people without housing and advancing health care. Lisa, whose father suffered from heart disease and passed away in 2018, has dedicated her time to supporting the American Heart Association by serving on the Phoenix Heart Ball committee since 2013.

The Geysers are grateful to have exceptional health care close to home.

“It’s easy to take for granted, but the pandemic made it evident that our hospitals and medical institutions are invaluable,” Jeff said.

While they recognize the role of fundraising events, the Geysers prefer hands- on ways to give.

“We’d rather roll up our sleeves and make a face-to-face connection with the people we’re helping,” Jeff said. “We know our children watch us. They’re normally right next to us doing the work. Things like stocking food pantries, decorating Christmas cookies and hiding eggs for Easter hunts at CASS show our boys that the kids there are no different.”

Lisa co-founded Families Giving Back in 2013 to create hands-on volunteer opportunities for children. It dissolved in 2018 when the demands of daily life became too great, but the legacy continues with several organizations still using its service model.

“The point was to fill a void,” Lisa said. “We changed a lot of rules and proved that children have value in the volunteer space.”