Chef Brother Luck Returns to Phoenix to Share His Story 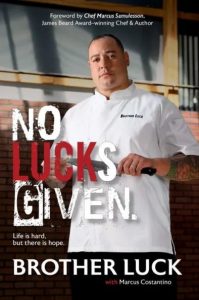 You may know chef Brother Luck from his appearances on “Top Chef,” “Chopped” and “Beat Bobby Flay,” but you can learn more about his background, including the role that Arizona played in his career path, in his new book, “No Lucks Given,” which will be available in early October. Luck will be signing copies at the Careers Through Culinary Arts Program (C-CAP) Harvest Moon fundraiser at Tarbell’s in Phoenix on Oct. 9.

“It’s a story of perseverance,” said Luck. “The book shares what it is like coming from hard beginnings and continuing to battle constant challenges stepping into adulthood and business ownership. My book gives insight into many of the C-CAP students who have a similar story.”

After his father passed away when Luck was 10 years old and the family fell on hard times, they moved from San Francisco to Phoenix. Luck studied culinary arts at Metro Tech High School and the Art Institute of Phoenix and received a C-CAP scholarship. C-CAP is a nonprofit that provides scholarships, mentoring and training for underserved high school students interested in culinary careers. Luck continues to give back through C-CAP and other organizations.

“As an alum, I’m still involved in C-CAP and I’m so honored to come back and be featured at the Phoenix event where my culinary career started,” Luck said.

Luck worked at the Hyatt Regency in downtown Phoenix and moved on to work at Hyatt properties in San Antonio, Chicago and Colorado. His career took him around the world and he settled in Colorado Springs. His signature restaurant Four is inspired by the Four Corners where Colorado, Arizona, Utah and New Mexico meet.

“The restaurant tells the story of the Southwest region, from the cowboy pioneer to the Native American and Hispanic cultures,” he said. “Being in Phoenix for the early part of my career set the tone for a love of Southwestern food. I will always consider Phoenix a second home.”

For more behind this Frontdoor, visit chefbrotherluck.com

Shoshana Leon is a culinary writer for Frontdoors Media and creator of Foodie Fo Sho.
More in: Culinary, Featured