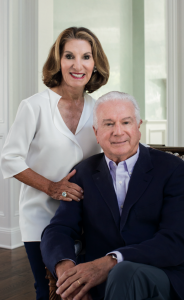 When Howard and Ellen Katz decided to escape New York winters and spend them in Arizona back in 1998, the couple was initially planning to relax and play some golf. But with a longtime philanthropic mindset and a drive to help the communities of which they are a part, they soon found themselves becoming involved with various destinations and nonprofits throughout the Valley.

They began exploring their new city, and Ellen, who had majored in art history at Northwestern University and been a collector of contemporary art, found herself drawn to Phoenix Art Museum.

Soon, she was volunteering and looking for ways to help the Museum.

In the years since, her contributions have been immense. Ellen not only served as chairman of the Phoenix Art Museum Board of Trustees from 2007 to 2010, but also created two of the most successful fundraisers in the Museum’s history: The pARTy and the Independent Woman Luncheon. Today, she is an honorary trustee.

In 2006, the couple also made a significant gift that resulted in the construction of the Ellen and Howard C. Katz Wing for Modern Art.

Additionally, Ellen became involved with The Phoenix Symphony, helping bring renowned musicians to the Valley for intimate fundraising events, and she is on the Barrow Neurological Foundation Board of Trustees.

Beyond the Valley, she is a trustee at Northwestern University, and has been a trustee at Mount Sinai Health System for almost 40 years.

Howard also became extremely involved in the Valley community and has served as chairman of the Arizona Science Center Board of Directors, and chairman of the HonorHealth Foundation Board of Trustees.

The couple is passionate about Arizona State University, and they are co-chairs of the ASU Foundation’s President’s Club.

“We truly can’t imagine living somewhere and not being a part of the community in some way. We value the opportunity to get to know and work with such wonderful and dedicated people,” Ellen says.